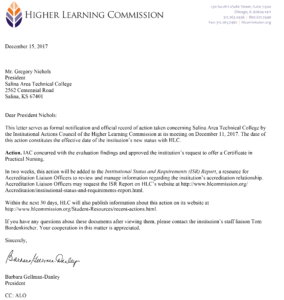 After receiving two additional approvals this week, Salina Area Technical College will offer a Practical Nursing program to up to 40 students starting in the fall of 2018.

Final approval to launch the program came this week; the Kansas State Board of Nursing approved the plan on Wednesday, and the college was informed Friday that the Higher Learning Commission had approved it also. The program was previously approved by the Kansas Board of Regents on November 15.

Plans for starting nursing programs at Salina Tech started not long after Greg Nichols became president of the college in July of 2016; the previous month, Brown-Mackie College in Salina announced it was shutting down.  Nichols reached out to stakeholders within the healthcare community to gauge the support for nursing in Salina.  The college formed an advisory committee comprised of nursing and healthcare leaders to guide the discussion of nursing education.