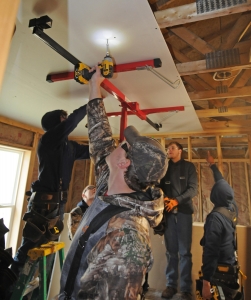 Watching his students methodically measure, cut and build, Kevin Watters is satisfied with the knowledge that they’ll be leaving a quality legacy — not only in their future professional lives, but right now, in the Salina community.

“I know these kids will be able to drive by these houses with their kids, and their grandkids,” Watters said. “It’s something that they can drive by, see the kids playing on the front porch and see the smiles on the people who own the house.”

Watters, construction technology department head at Salina Area Technical College, is leading the school’s initiative to build several Habitat for Humanity houses in the 700 block of Choctaw Ave., Salina. The school saw an opportunity to revive their partnership with Habitat for Humanity after the nonprofit began moving to construct homes so close to Salina Tech’s campus.

“We found out last year before Christmas break that Habitat had bought these houses,” Watters said. “Because of the proximity to our school, I got excited, contacted them and told them we were interested.”

The area has seen little use in the last few decades, Watters said.